VASSALBORO, Maine (WABI) – If you’ve ever wanted to ride a mountain bike through an out-of-commission, and possibly haunted mill, you’re in luck. 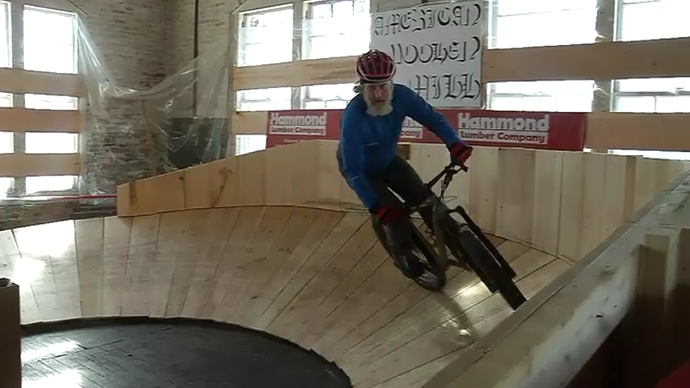 There’s an urban mountain bike course at the old American Woolen Mill in Vassalboro for a fundraising event this weekend.

“We set up as a relay race and there are two-person, three-person, and four-person teams that will be racing around the mill. Down in the main reception area of the mill is where all the teams will be staged. We have a band that will be playing in there,” said David Richard, Director of the Central Maine Cycling Club.

Since last October’s wind storm caused significant damage to the roof of the old American Woolen Mill, its owner, Ray Breton, has been floored by the community support he’s received to help fix it.

“After we had our disaster and how many people in town have stepped in and helped out doing fundraisers, spaghetti suppers, we’ve got a couple concerts in line coming up,” said Breton.

The plans for this Sunday’s fundraiser took Breton by surprise when he saw the elaborate, multi-floored course built out.

“We built up a bunch of wooden features and used existing structure from the mill and it’s just been a phenomenal build. A lot of it has been planned. We mapped out the mill right from the beginning and then we changed our minds, built stuff, and then kind of went back to the drawing board,” said Richard.

Hammond Lumber Company donated the lumber to build ramps, curves, and other obstacles.

The course uses over 100,000 square feet and two stories of the mill, incorporating offices, warehousing, and plenty of obstacles, and it is a lot of fun. I got the chance to strap on a helmet and try out the course myself.”

It’s about three-quarters of a mile-long course that zigs and zags all around the mill. The race doesn’t start until 1 pm on Sunday, but folks can arrive early to get acquainted with the course.

“We’re going to have a couple hours of practice beforehand. We’ll be up coaching people through, spotting to help them through,” said volunteer Glenn Fenlason.

All of the money raised goes toward the ‘Save the Mill’ campaign. Interested riders can register same-day or go to https://www.bikereg.com/vassalboro-mill-fundracer to sign up online.

But for folks unable to attend, Breton says he’ll be leaving the course in place for community use later on.