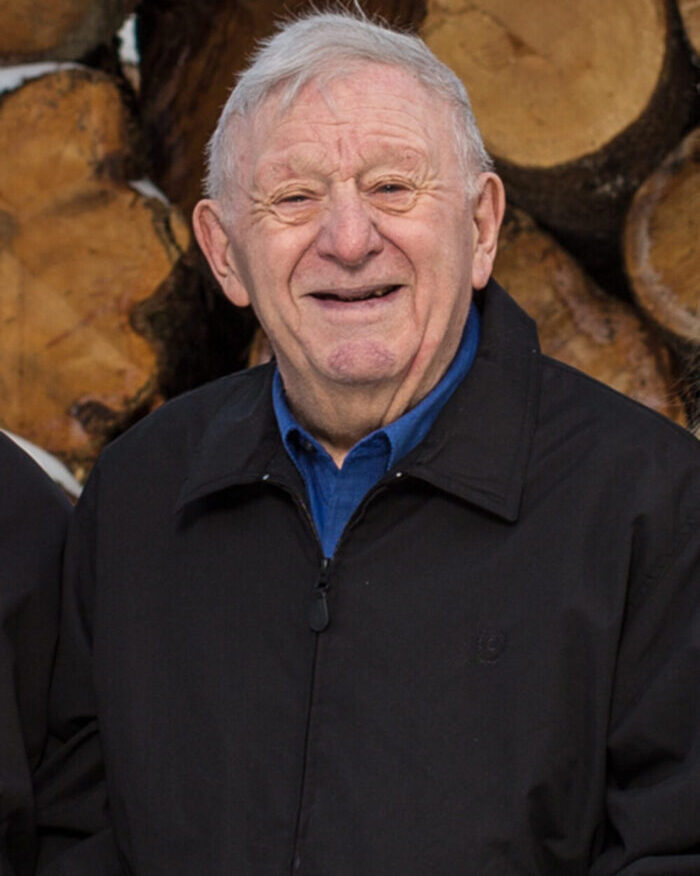 Born in Belgrade on September 22, 1927, the son of Raymond E. and Helen (Thompson) Hammond, he came of age during the Great Depression. Clifton, widely known as “Skip,” grew up in Belgrade working on the family farm. As a young boy, he helped with haying, took care of the farm’s milk cows and assisted in the milking process, and worked in the woods with his father.

When Skip was in high school, his father, a rural mail carrier, became seriously ill and was treated at the Lahey Clinic in Boston. To help support the family, Skip returned to the woods to harvest and sell logs, pulp wood and firewood with his brother, Reggie, and his friend, Oliver Yeaton.

Skip graduated from Belgrade High School in 1945. He had the distinction of being the only male in a high school class of seven students. He would often jokingly remark that he graduated seventh in his class!

Following graduation, Skip enlisted in the Army and was deployed to the Philippines during World War II. While he was in the service, he had the opportunity to shake hands and speak with General Dwight D. Eisenhower, whom he always respected. After his honorable discharge in 1947, he returned to his home in Belgrade and resumed his partnership with Oliver Yeaton, as the H and Y (Handy) Pulp Company.

On May 8, 1948, Clifton married Verna Lucille Guptill, and together they shared life’s journey for 74 years in Belgrade. 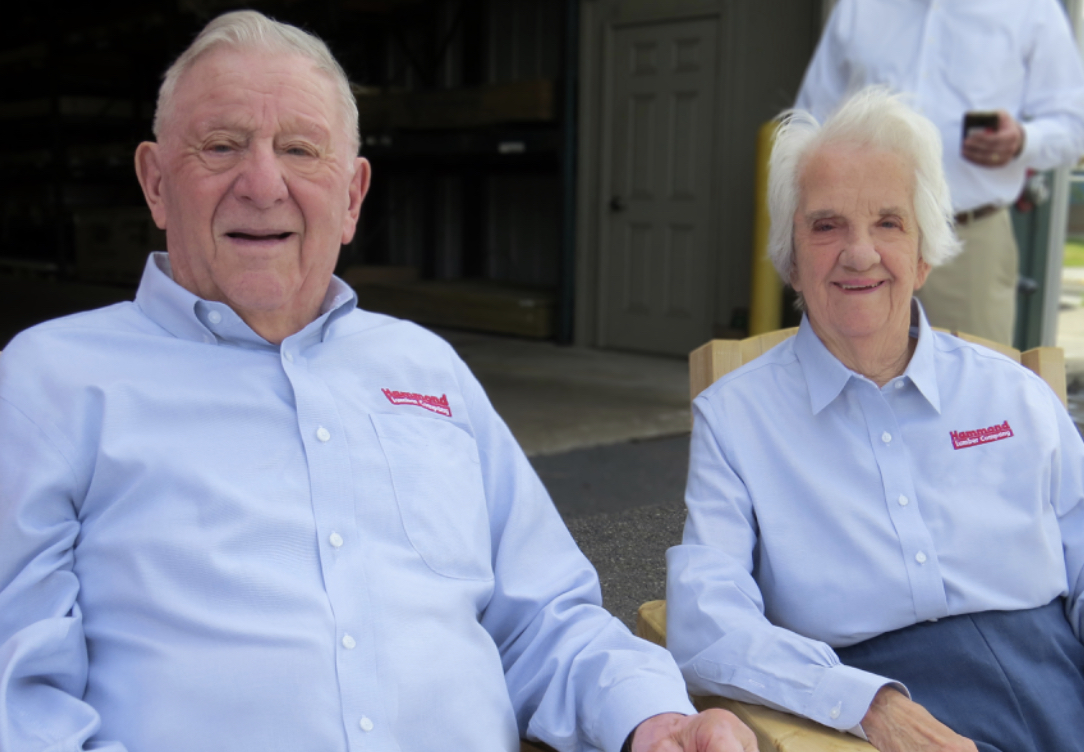 In 1953, Verna loaned Skip $50 to start a sawmill. Together, Skip and Verna founded the Clifton K. Hammond Lumber Company in Belgrade, later known as Hammond Lumber Company. In the 1950s, a sawmill was a risky investment that typically yielded a low success rate. Skip kept his head down working in a determined, quiet way while he faced adversity and the inherent risk of being in the sawmill industry. His strong work ethic and entrepreneurial spirit helped him persevere through the daily business challenges of running a sawmill. For many years, Skip worked in the woods cutting trees from dawn to dusk to supply the sawmill. He would cut trees when the weather was good, and work in the sawmill when the weather was bad. In the late 1950s, Skip bought and installed a log debarker, woodchipper, and planer mill. In 1960, he bought lumber dry kilns and began producing his own finished lumber. The mills were truly Skip’s passion. As business grew, Skip picked up additional helpers and eventually began to hire full-time employees. In the early years, Skip’s daughter, Deborah, was involved in doing the payroll and adding log slips for payment. In 1967, Skip and his son, Donald, opened Hammond Lumber Company’s first retail store in Belgrade. In the following decades, Skip and Donald continued to open retail stores across Maine in Skowhegan, Farmington, Auburn and Greenville. Skip’s son-in-law, Robert Thing, was the first branch manager of the Skowhegan location. Some of the buildings and warehouses currently in use at various Hammond Lumber Company locations were designed and built by Skip and his small crew of employees and friends. Skip retired in the early 2000s, but he was often seen driving through the yard, or stopping by to check on things long after he had retired. Step by step, and piece by piece, with the help of family members and loyal employees, Skip and Verna laid the groundwork for a family enterprise that would eventually become one of the largest independent building material suppliers in New England with 22 locations across Maine and New Hampshire and the fourth largest family-owned business in Maine.

“Skip Hammond is the original heartbeat of Hammond Lumber Company,” said Mike Hammond, president and CEO of Hammond Lumber Company. “We are grateful and will be forever indebted to Skip’s entrepreneurial spirit, blue-collar leadership style, hard work, and care for his employees. His fire will continue to burn with future generations, and we will carry it forward proudly.”

Skip was an exceptionally talented individual and entrepreneur who was creative, resourceful, and industrious. He was mechanically inclined with the ability to fabricate and repair many things, and knew how to turn old, discarded parts into something useful. In 1958, he built his first forklift out of an old four-wheel drive army truck and later built the automated sawmill that is still in operation today. He also designed and built a snowmobile with a hydraulic drive and reverse, a three-ski motorized ice sled, truck bodies, logging arches, a plow attachment frame, and countless other equipment used in industrial, logging, and milling applications. Skip was a problem-solver with an avid curiosity for how things worked.

In his early years, Skip enjoyed playing baseball on Sundays on the Belgrade town team. Frequently, he would go back to his mother’s farm to help with the chores. He also served as the Belgrade Road Commissioner and chief of the Belgrade Volunteer Fire Department.

He and Verna owned their own Christmas tree farms, which he continued to operate well into his retirement. One holiday tradition that both he and Verna especially enjoyed was overseeing the choose ‘n cut season at their tree lot on the Bean Road in Mount Vernon, where Skip was always ready to share a joke or wrap a tree. He developed many cherished and lasting friendships through his membership in the Maine Christmas Tree Growers Association. Also during his retirement years, you could find him on his bulldozer or excavator, developing parcels of land which he greatly enjoyed.

When he wasn’t involved in the continuous demands of a growing business, he enjoyed participating in family outings, snowmobiling, hosting an annual community pig roast, playing chess, fishing, or sharing a meal with friends. He also enjoyed spending time at his camps on Hales Pond in Fayette, Kennebago River in Oquossoc, Moosehead Lake in Rockwood, and Great Pond in Belgrade. Skip was a people person who loved to make new friends, share a story, and contribute a joke for any and all occasions.

With reluctance and genuine humility, Skip received many awards throughout his lifetime. In 1989, as president of Hammond Lumber Company, he was awarded “Business of the Year” by the Kennebec Valley Chamber of Commerce. In 1994, he was selected as the “Lumber Person of the Year” by the Retail Lumber Dealers Association of Maine. Also that year, he was named “Outstanding Sawmill Operator” by the Northeastern Logger’s Association for the safe, innovative, and first class operation he had run for 40 years. Then in 2002, he was awarded a “Lifetime Achievement Award” from the Kennebec Valley Chamber of Commerce. The 2018 Annual Belgrade Town Report was dedicated to Skip and Verna Hammond in recognition of their many contributions to the Town of Belgrade.

Skip naturally shied away from the public spotlight, but his generosity and benevolence were never lacking. He was a major contributor to the building of the Belgrade Community Center for All Seasons, Belgrade Boy Scouts and Girl Scouts, Waterville Alfond Youth & Community Center, and Mid-Maine Technical Center, but perhaps his greatest impact on the community he loved was his openhandedness and willingness to help, privately and without recognition or applause. His anonymous kindness benefited many individuals, charities, and towns throughout the state.

Skip’s greatness was shored up by a deep sense of gratitude for his life and for the many people who had helped him along the way. He worked hard, cared for his family, took good care of his employees, served his community, responded to people in need, and took great pleasure in the common and ordinary joys of life. He also understood the need for personal responsibility and readily did what had to be done to provide for the people who depended upon him. He was never afraid to get his hands dirty and pass on what he had learned over the years. Countless individuals have benefited to one degree or another from his willingness to lend a hand, to offer support, and to demonstrate by his actions what it meant to be a man of his word. Skip led by example, and was never happier than when he was hard at work or surrounded by his family.

When speaking of his life, Skip was both modest and grateful. “I was in the right place at the right time, and everything eventually came together. It has been a very good life. I could hardly wait to get up in the morning and go to work because I could do what I love.”

He was a great husband, father, grandfather, great-grandfather, member of the community, and a friend to many; he will truly be missed.

The family would like to especially thank Dr. Edmund Ervin for many years of care, support, conversation, and friendship.

Per Skip’s wishes, there will be no visiting hours or funeral services. There will be a graveside service at Pine Grove Cemetery in Belgrade on Saturday, September 24 at 1:00 PM. Arrangements are by Wheeler Funeral Homes and Cremation Care, 26 Church Street in Oakland. An online guestbook may be signed, and memories shared at
https://www.lawrybrothers.com/obituaries/clifton-hammond.

In lieu of flowers, those who wish may make memorial donations to the
Belgrade Fire and Rescue Association,
PO Box 404,
Belgrade, ME 04917.