Close to 3000 Patriots’ fans waited patiently to have their picture taken with Rob and shake his hand.  Some even had the privilege of trying on his Super Bowl XLIV Championship Ring.  The event was a perfect opportunity for Maine Fans to celebrate the Patriots’ 5X Super Bowl Victory and commemorate Ninkovich’s first trip to Maine.

It was an especially memorable event for all the children in attendance.  Their pride and excitement was apparent as they got to meet the 6’2” linebacker in person.  Ninkovich’s obliging personality and easy manner certainly made it a dream come true for many.  Mark Huard from Central Maine Photography was on hand to capture each special moment. 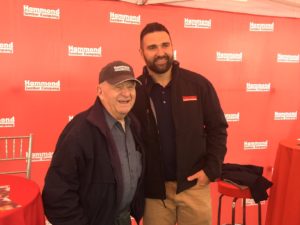 “Rob Ninkovich is a true gentleman and exemplifies the high standard for excellence put forth by the Patriots’ Organization.  He was as kind and gracious to the first person in line as he was to the final fan who made it to the stage 6 hours later”, Mike Hammond, President of Hammond Lumber Company, shared.  “The entire day exceeded my expectations and I was gratified to see the positive impact it had on our employees, contractors, vendors, neighbors, and friends”, he added.

Hammond Lumber Company is headquartered in Belgrade, Maine with 13 locations throughout the state, and has always been a generous supporter of local sports programs.